Robert P. Connors was sworn in as a Sweden Town Judge by the Honorable Alex R. Renzi, Supervising Judge, Seventh Judicial District on February 24. Connors replaces the Honorable William J. Cody who passed away following a short illness on December 17, 2009. Judge Cody’s widow, Mrs. Debra Cody, held the Bible for Judge Connors as he took his oath of office. 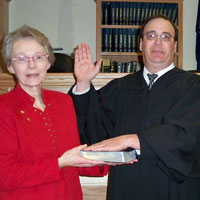 Connors was instrumental in solving several high profile Rochester-area crimes during his tenure with the sheriff’s department – the “Leaper” bank robberies, the 1987 Riga love-triangle murder, the Monstream murder case. Investigator Connors also received many awards and commendations throughout his career; most notably the 1992 Monroe County District Attorney’s Distinguished Citizen Award and the 2002 BPOE Officer of the Year Award. Connors retired from the Sheriff’s Department in 2002.

Following Connors appointment to the judge’s seat, Sweden Town Attorney James Bell noted that he had known Connors for more than 25 years and that Connors had an outstanding reputation in the Monroe County Sheriff’s Department. “I am confident that Bob will do an excellent job as a Sweden town judge,” Bell said. “We are all saddened by Judge Cody’s passing, but we are very fortunate to have someone of Bob’s caliber to assume the bench.”

Connors’ appointment is effective until December 31, 2010. He will have to stand for election in November in order to continue in the position. Connors and his wife, Patricia, a Sweden Town Board member, reside on Country View Terrace. Connors is very active in the Nativity BVM Church, the Knights of Columbus and the Brockport Area Veterans Club. He is the son of William and Joyce Connors.